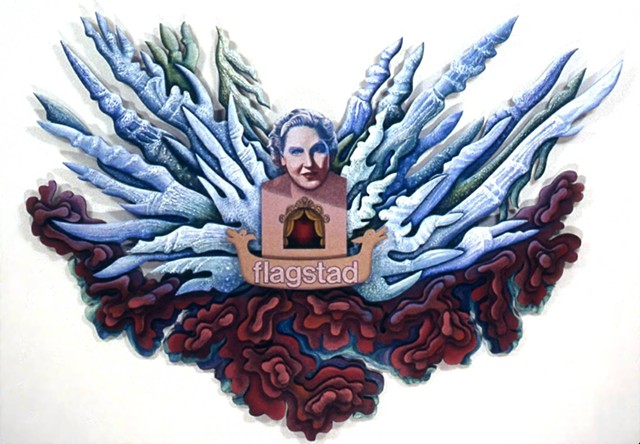 Kirsten Flagstad - Singer of the Century

In a career that spanned more than forty years, Kirsten Flagstad was arguably the greatest female opera singer of the first half of the 20th century. A modest and basically shy person, she used her beautiful, dark soprano voice with accuracy and musicianship. She brought to her operatic characterizations, many of the qualities that she herself possessed: Those of integrity, nobility and sincerity. She was not just a great artist, she was also a wonderfully kind and generous human being.

Kirsten Malfrid Flagstad was born in Hamar, Norway on July 12, 1895, to parents who were both professional musicians. On her tenth birthday, she was given the score of Wagners' 'Lohengrin'. Accompanying herself on the piano, she learned the part of Elsa. She continued with piano and vocal training and in 1913 made her professional debut in d'Albert's 'Tiefland'. Roles in other musical productions followed and in 1914, she made her first recordings. She went to Sweden for further vocal studies and on her return to Norway, decided to stay there and marry Sigurd Hall. In 1920, she gave birth to her daughter, Else. A few months later, in preparation for a new role, she discovered that her voice had doubled in power.

In Norway throughout the Twenties, Flagstad sang a variety of roles; operetta as well as opera. In 1928, finding herself separated from her husband, she went to Goteborg, Sweden to sing in the opera house there. She sang dramatic roles such as Tosca and Aida. In 1929, at the National Theater in Oslo, Flagstad sang the part of Elsa in 'Lohengrin'; the part she had taught herself when she was ten. A wealthy businessman, Henry Johansen, partially financed the production. At the first night party, Flagstad and Henry Johansen finally met and in 1930, they married.

In 1932, Flagstad sang her first performance of Isolde ('Tristan und Isolde') in Oslo. It was a role that she would sing a total of 182 times. There was considerable interest from various musical quarters and she auditioned for Winifred Wagner in Bayreuth, Germany. She sang a couple of small roles at Bayreuth in 1933, and during the 1934 season, she sang Sieglinde ('Die Walkure') and Gutrune ( 'Gotterdammerung'). She travelled to St. Moritz, Switzerland to be auditioned by the Metropolitan Opera's general manager and the company's chief German conductor. She was engaged for one year and made her debut at the Met on February 2, 1935 as Sieglinde ('Die Walkure'). At the matinee performance, which was being broadcast, she created a sensation. A new star had been born.

For seven seasons, Kirsten Flagstad was the Met's biggest box-office attraction. She sang all the great Wagnerian soprano roles, including Brunnhilde, Isolde, Kundry, Elsa and Elisabeth. Her one departure from the Wagnerian repertoire was as Leonore in Beethoven's 'Fidelio'. Her career extended across the United States, with appearances at the Chicago and San Francisco opera houses. She also gave many recitals and concerts. In Europe, she sang at London's Covent Garden and at the Vienna State Opera.

On April 9, 1940, the Germans invaded Norway. Flagstad received a telegram from her husband that urged her to remain in the States. In August, her daughter Else married an American, Arthur Dusenberry. Flagstad continued with her career but during the latter part of 1940, received another telegram from her husband, asking her to return to Norway. When she had completed all of her engagements, Flagstad left New York for Norway on April 19, 1941.

During the war years, Flagstad performed only in the neutral countries of Switzerland and Sweden. In May 1945, after peace had been declared, Flagstad's husband was arrested. He died in prison in June 1946, before his case could be brought to trial. Henry Johansen had at one time been a member of Vidkun Quisling's collaborationist party, but had resigned at Flagstad's urging, in July 1941. Kirsten Flagstad had not had any contact with the Germans and was never formally charged with anything by the Norwegian government. But because her finances were interwoven with her husband's, she did not get her passport back until November 1946. The Chief Justice of Norway's Supreme Court had said of her, "She always preserved a firm patriotic attitude"

In January 1947, Kirsten Flagstad resumed her career, with a concert in Cannes. In March, she travelled to the United States, where she saw her baby grandson, Sigurd. She had become a controversial figure and fantastic stories were spread about her activities during the war. The columnist Walter Winchell began an intensive campaign against her that was filled with accusations and lies. There were demonstrations both outside and inside some of the concert halls where she performed. What Kirsten Flagstad had to endure at this dark moment in our cultural history, amounted to nothing short of persecution. But eventually the protests and lies ceased, with the innocent and much- maligned Flagstad being allowed to resume her normal career schedule.

Flagstad made her second debut at the Metropolitan Opera on January 22, 1951, as Isolde. Rudolf Bing had succeeded Edward Johnson as general manager at the Met, and ignored any controversy by hiring her back. On April 1, 1952, she bade farewell to the Met with a performance of Gluck's 'Alceste'.

Another role that Kirsten Flagstad played during the last years of her operatic career, was as Dido (Purcell's 'Dido and Aeneas'). She performed this in England at Bernard Miles' little Elizabethan theater, the Mermaid. June 5, 1953, was the last time she sang at the Mermaid as Dido, and it was her very last performance in opera.

During Flagstad's latter years, her recording contract with HMV having lapsed, she signed with London/Decca and made some of the finest recordings of her career. She continued to sing, mostly in Norway, for various charitable concerns. On February 3, 1958, Kirsten Flagstad was appointed the first director of the Norwegian Opera. Because of ill health, she reluctantly had to resign some two years later. She died in Oslo on December 7, 1962. Her legacy, especially for those of us who were not fortunate enough to see her in performance, is the vast number of recordings that she made between 1914 and 1959.